Who is Kenn Fox?

Guitarist and Composer Kenn Fox has been teaching, performing, and recording in Southern Wisconsin for over 40 years. He holds a Bachelor of Science Degree from UW-Whitewater with K-12 teaching certification. He has taught in a variety of public and private schools, conservatories, seminars, and workshops, assisting students at all levels. 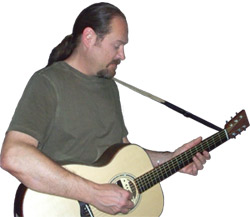 Kenn is a master technician and historian in a variety of both acoustic and electric guitar styles. Particular areas of expertise include Fingerstyle, Celtic, Piedmont Blues, Delta Blues, Electric Blues, Bluegrass flatpicking, Gypsy Jazz, and Bottleneck/Slide techniques. He is also well versed in the use of open and alternate tunings.

Kenn enjoys working with students in the recording studio on their development of performance and songwriting technique.

Kenn has recorded twenty critically acclaimed albums of original fingerstyle guitar music, Celtic Music, and Blues for the Wisconsin based Spiritone Records label. Kenn's recordings have been favorably reviewed by Fingerstyle Guitar magazine and 20th Century Guitar magazine in the US, and by Acoustic UK magazine in England. He performed as a guitarist on many other recordings including nine albums with Blues vocalist Mare Edstrom and two recordings with the Midwest Guitar Trio.

Kenn is also an accomplished freelance producer and session player and is always hard at work on any number of studio projects. He has produced dozens of independent artists, bands, and compilations.
Kenn's Discography can be found here.

Kenn Currently performs and records as a solo artist, with the Midwest Guitar Trio, with the Celtic band Kellswater Bridge, and with the acclaimed Prog band Voltage Unit. He is the owner of Anam Recording Studio, Paramount Record Shop, and Paramount Guitars in Watertown Wisconsin.

Visit the Spiritone Records channel on YouTube for more videos!